Devereux, a horse with heart 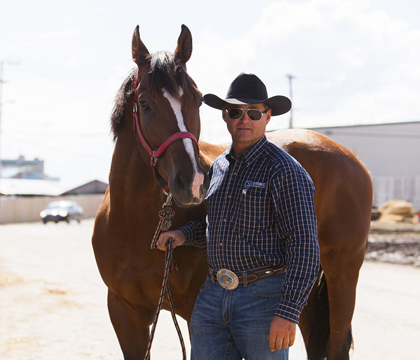 Rick Fraser, along with his daughter Kaylee, made the long road trip from Wetaskiwin, Alta., to Kentucky in the fall of 2012 to purchase new recruits for the family’s award-winning chuckwagon string.

They had filled their six-horse trailer and were on their second day of travelling home when they stopped in Saskatoon to rest and check on the horses.

That’s when they noticed Devereux, a seven-year-old thoroughbred gelding, was not doing well.

“It was Saturday morning. I was on call at the clinic and I got a phone call from this man, who was quite stressed out, saying that his horse was pretty sick after this long haul,” says Dr. Kate Robinson, who was an equine field service resident at the Western College of Veterinary Medicine’s Veterinary Medical Centre (VMC) at the time.

“He was parked at the Grasswood Esso and asked if I would come out and meet him. I kind of wondered, ‘What am I getting myself into?’”

Robinson agreed to come out to the truck stop on the outskirts of Saskatoon and have a look. After crawling past the other horses to get to Devereux at the front of the trailer, Robinson confirmed that the gelding’s high fever, depression, bad-sounding lungs and trachea and gargle in his breath meant a likely diagnosis of shipping fever.

She recommended that Devereux should be treated at the veterinary medical centre’s Large Animal Clinic. Fraser didn’t hesitate.

Once they arrived at the clinic, Fraser unloaded Devereux and WCVM clinician Dr. Chris Clark and large animal resident Dr. Sara Higgins immediately went to work on the sick horse.

“It worked out for the best that we were here in Saskatoon,” says Fraser. “Circumstances played a big part in saving Devereux because timing is always critical.”

Fraser adds that the WCVM clinical team was very thorough: “It wasn’t even 20 minutes and he was on antibiotics. He got in right away; they were very professional, courteous and explained everything they were doing.”

Devereux was lucky — thanks to prompt detection and treatment, he experienced a less complicated form of shipping fever that was akin to pneumonia. Given time, it could have progressed to painful fluid in his chest cavity known as pleuropneumonia that carries a much graver prognosis.

Still, shipping fever in any form is serious and can delay or even terminate a horse’s athletic career.

After four days at the WCVM, Devereux was sent home on antibiotics with best wishes and hopes for recovery. Robinson didn’t expect that she would ever see Devereux and Fraser again.

But when Saskatoon’s Marquis Downs hosted its inaugural stop on the World Professional Chuckwagon Association (WPCA) circuit in June 2013, their paths crossed again.

Robinson, who was on duty as track veterinarian, was standing near the finish line as the last race went by on the first day of competition.

“I like to watch the horses as they come in after the end of the race,” says Robinson, who recently became an assistant professor in equine ambulatory care at the WCVM. “It gives me a chance to see any lameness as they go by and I’m close enough that the drivers have a chance to ask me to meet them back at the barns afterwards if need be.”

When the last driver — the race’s winner — came back up the track, Robinson thought he looked oddly familiar.

“Rick recognized me before I recognized him,” says Robinson. “All of a sudden he stood up, yelling and pointing at the left wheel horse and saying, ‘This is him! This is him!’ And I yelled out, ‘Devereux!’ We were both so excited!”

Robinson met with Fraser after the race. “Devereux’s been running and winning for Rick, and he’s one of the best horses in their barn. We’re just so happy we were able to help him. It was one of those ‘that’s why you become a vet’ type of stories,” she adds. “It was really cool to see that horse.” 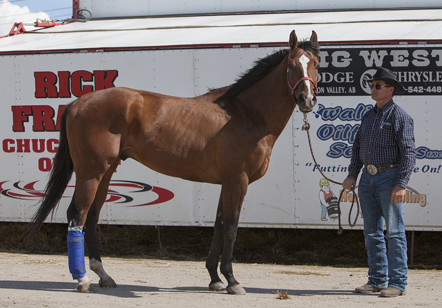 Devereux was a key part of Rick Fraser’s top team at the Grande Prairie “Stompede” in June 2013 where they won the championship. Photo: Christina Weese.

Devereux is one of many thoroughbred racehorses that have found a second career in chuckwagon racing — a uniquely Canadian sport. The first races were held at the Calgary Stampede in 1923, and the sport has grown to encompass two professional circuits based in Western Canada.

Fraser, a third-generation chuckwagon driver, started as an outrider in 1976. He took the reins of his own team in 1982 and was the WPCA champion in 2004.

The sport is also a family affair: Fraser’s wife Sue is alongside 24/7 whether it’s driving a rig, being a barn hand, making meals and any other jobs that need to be filled. Their three children were always along on the road and helping when they were young. Now as adult children with jobs of their own, they come to race meets and help out as time allows.

Their oldest daughter Amy and her son Coy come and help out with cooking and cleaning. Kaylee is a certified equine chiropractor, massage and acupressure therapist and works on the horses when needed. Their son Cody is a great help in the barn and in the wagon with his dad. Someday, he will take over the lines and have his own chuckwagon outfit..

Every year since 2010, the WPCA and/or the Calgary Stampede have honoured Fraser’s team with an Equine Award of Excellence. The awards are meant to give greater recognition to the equine heroes of the races. Fraser’s awards include two for “Nickle,” a left lead horse, two for “Max,” and one for “Beau” (both outrider horses). Fraser’s right leader, “Speirman,” recently captured the 2013 Equine Award of Excellence.

“It’s just like any other athlete,” explains Fraser. “If you don’t take care of them and train them really well and feed them properly, they can’t perform for you. We’re continually breaking track records that were set years ago and the only way you can do that is better feed and training.

“Chuckwagon horses have to make a right-hand turn, for example, and if their poll is out, they fight the pressure. When everything’s in line, a horse wants to do what you want him to do – always.”

Devereux, a left wheel horse, is slated to move into the all-important right lead position in a couple of years. He took to chuckwagon racing like a natural.

“He’s a really smart, classy horse,” says Fraser. “And really athletic – it didn’t take him long to figure out what to do.”

In fact, the flashy dark bay horse was a key part of Fraser’s top team at the Grande Prairie “Stompede” in June 2013 where they won the championship. Devereux also performed with his team on the second and third days of the 2013 Calgary Stampede, taking home two top day money runs. These wins helped Fraser earn a spot in the Stampede’s $100,000.00 “Dash for Cash” Sunday Final. Fraser finished a respective second in the aggregate final of the Stampede.

With Devereux and all of his other horse mates, Fraser captured the 2013 World Professional Chuckwagon Association Title — a job well done.

“I can’t say enough about what they did for the horse [at the WCVM],” adds Fraser. “They went beyond what they had to do to save his life. They really did. I’m really grateful for what they did to save my horse.” 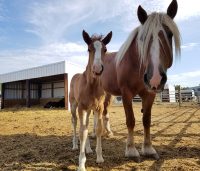 When it comes to bringing new horses...
full story »